Why Health Experts Are Talking About CBD

It's been a whirlwind few years for cannabis, with state after state approving medical marijuana and decriminalizing recreational pot, or in many cases, legalizing it outright. One of the biggest winners to emerge from this seismic cultural shift has been CBD, a cannabis derivative that is expected to be a $22 billion industry by 2022. Touted for its many potential health benefits and mild, non-psychoactive effects on the body, CBD is being hailed by some as a potent potion with a still-untapped potential to heal, soothe, and calm. But what is CBD, how do you use it, and how does it work?

Related: Why So Many Seniors Are Turning to CBD

With terms like marijuana, hemp, and cannabis often used interchangeably, it might be hard for those unfamiliar with them to tell one apart from the other, and the arrival of CBD adds an entire new layer of confusion.

"Cannabidiol, commonly called CBD, is one of the compounds found in the hemp and marijuana plants, which are both strains of the cannabis plant," says Scott Hix, managing director of Aethics, a sports-focused CBD company.

Hix reminds those who abstain from marijuana or who don't want to feel "high" that CBD doesn't contain marijuana's active ingredient. "It is critical to note that CBD is different than THC, which is the compound found in the marijuana plant that causes a psychoactive effect," he says.

How CBD Can Help the Body Help Itself

Unlike narcotics that add to or alter the body's natural chemistry, CDB merely enhances the function of a biological system that's already inside the body. "A person's endocannabinoid system regulates many physiological systems, including mood, appetite, and pain," says Marc Lewis, executive editor of Remedy Review, a natural health site centered on CBD. "Adding cannabinoids to your diet empowers this system to better regulate itself. In this way, the effects of CBD are indirect. It's the body, empowered, restoring itself to its natural balance."

Proponents of CBD often push it as a cure-all tonic, but the truth is that most people turn to it for just a handful of applications. "Cannabis boasts a tremendous array of health benefits but it is gaining traction primarily as one of the most effective natural anti-inflammatories," says Sam Morrison, a cannabis researcher and health and wellness expert for Glacier Wellness, a company dedicated to sustainable CBD products. "CBD is also particularly effective for women in treating pain, stress, and inflammation associated with menstruation."

If you're wondering how CBD is delivered, you have plenty of options in terms of how you choose to take it. "Because CBD offers such a diverse range of health benefits, it's no surprise to find an equally diverse spectrum of products," Morrison says. "In fact, you can now find CBD in practically everything from bottled water and gummy bears to suppositories and vape juices."

One of the most popular ways to take CBD is in tincture form where CBD-rich hemp flowers are steeped in a high-proof grain alcohol and slowly heated over low heat to extract the active compounds. Tinctures are often flavored with other sweet-tasting natural oils to make them more palatable or added to other beverages such as tea or juice. "Many people prefer CBD tinctures, since it is fast-acting, tasteless and can be added to virtually anything," Morrison says. "One of the reasons tinctures are so beneficial is that they can be made at home with minimal effort. Tinctures are often chosen simply because they offer fast-acting relief, particularly in treating headaches, anxiety, menstrual pain, and seizures." Pre-made tinctures can also be purchased for those who don't wish to go the DIY route.

Keep in mind that your experience with CBD will likely vary depending on your method of delivery. "CBD can be taken as an oil under the tongue, vaped or swallowed in a gummy or capsule," Lewis says. "Vaping gives the most immediate relief. Oil under the tongue delivers CBD directly to the bloodstream efficiently. Gummies and capsules usually take longer to work, as they depend on a person's digestion and metabolism."

CBD as an Aid in Sports Therapy

Recently, athletes and former athletes have turned to CBD in hopes of coaxing the healing properties out of it and into their weary bodies. "CBD has been shown to provide relief for many ailments that current and former athletes experience, and that everyone experiences at times," says Hix, who specializes in CBD for athletes. "It is commonly used to reduce pain, inflammation, arthritis, anxiety, depression and sleeplessness. People often use CBD as an alternative to over-the-counter drugs, such as ibuprofen and addictive opioids."

"CBD can be used as a treatment for a variety of ailments, physical and mental," adds Lewis. "People with an active lifestyle benefit from taking CBD in the form of reduced inflammation and pain and a speedier recovery."

CBD in Cosmetic and Beauty Applications

CBD can also be ingested through the skin. "Many brands are adding cannabis to their beauty products, such as anti-aging creams, lip balms, moisturizers and muscle rubs," Morrison says. "Likewise, CBD is becoming popular among spas and other healthcare facilities thanks to its many skincare qualities, including protection from environmental aggressors, pain relief and moisturizing benefits."

The pharmaceutical industry is working on a potentially groundbreaking application for CBD that goes far beyond at-home remedies for common aches, pains, sleeplessness or anxiety.

The Best and Worst Health Food Trends of 2019

42 Surprising Facts About the Marijuana Industry

11 Diet Supplements: Are They Worth the Money?

"The FDA recently approved the use of a CBD-based drug to significantly reduce seizures related to a form of epilepsy," Hix says.

Lewis also cites a World Health Organization (WHO) report that states, "CBD has been demonstrated as an effective treatment of epilepsy in several clinical trials... There is also preliminary evidence that CBD may be a useful treatment for a number of other medical conditions."

An Impressive Lack of Side Effects

If you're looking for a reason to avoid CBD, they aren't easy to come by. "Research, such as reports from WHO, have not found adverse health outcomes," Hix says.

Lewis tends to agree, but he cautions people to follow the same steps they would take before trying any new health regimen. "Before taking CBD, have a conversation with a medical professional about potential drug interactions," he says. "Side effects are limited, but it's good to talk to a professional."

The Legal Status of CBD

CBD enjoys fully legal status in most of the country, but like recreational and medical marijuana, users are still required to navigate an inconsistent patchwork of state and federal laws.

"Forty-seven states, Washington D.C. and Puerto Rico have passed laws that permit recreational or medicinal use, or both, of CBD," Hix says. "Only Idaho, South Dakota and Nebraska have not passed such laws, despite the fact that hemp-derived CBD products do not make you high when used as recommended." 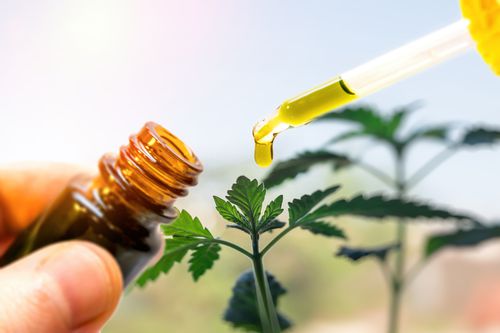 CBD Allergies Are Rare But Possible

Sandra Hinchliffe, of cannabis-based tea, herb, and cuisine site Posy and Kettle, suffers from life-threatening food and environmental allergies. She wants people to keep several things in mind as it pertains to allergies and CBD. "First is that, yes, you can be allergic to cannabis, hemp, and CBD extracts," Hinchliffe says. "If you have an allergy to these products, or if you develop an allergy, you need to cease use of any of these cannabis or hemp products immediately."

Hinchliffe also warns that "CBD or cannabis of any kind is not a cure or even a treatment for other allergies."

"CBD has no effect on the mast cell degranulation that takes place during an allergic reaction," she says. "And CBD cannot stop an allergic person's body from producing the IgE antibody to their allergen."

Hinchliffe acknowledges that the anti-inflammatory properties in CBD and cannabis in general can sometimes make seasonal allergy sufferers feel better. "But they are never a replacement for the protocol established by a doctor for treating allergic symptoms," she says. "No one should ever use CBD or cannabis to replace things like medical inhalers, allergy medicines, or EpiPens."

The Threat of Cross-Contamination

Hinchliffe also points out that, just as with food, cross-contamination is possible with CBD when it's produced in a facility that also processes one of what she calls "the major nine allergens." Those are soy, wheat, sesame, eggs, dairy, tree nuts, peanuts, fish, and shellfish. Anyone with life-threatening allergies to any of them should make sure they know exactly where their CBD comes from.

"Personally, I've seen very little if any care or concern in the cannabis industry as a whole when it comes to serving the allergic community," Hinchliffe says. "I don't even feel that the standards which one might find for allergy-friendly products sold at Whole Foods are the same at all."

CDB is Not FDA Regulated

Like all supplements, CBD exists in a murky legal and regulatory gray area, even in the states that permit its sale and use. "The FDA does not regulate over-the-counter supplement products," Hinchliffe says. "So in addition to allergen contamination or cross-contact, there may or may not be the amount of CBD described on the label."

So while many health experts see great potential with CBD for a variety of treatments, as a consumer and patient, it's important to consider the variety of health, legal, and safety issues involved — just as one would with any possible treatment plan.